The North Shore Black Bear Society is a non-profit organization. We work in partnership with local and regional governments and other groups involved with black bears and bear attractant issues. Our education program is delivered by Acting Executive Director, Christine Miller, and a team of dedicated volunteers across the North Shore. We support residents, visitors and bears in the District of North Vancouver, the City of North Vancouver, and the District of West Vancouver.

Our educational outreach is provided year-round in the following ways:

Christine Miller, a former classroom teacher, combined her teaching skills and her desire to  protect bears in the North Shore Black Bear Society’s educational programs for over 15 years. Her desire has remained constant – to stop the preventable deaths of black bears.

Formerly a Bylaw Officer, Armaan has extensive experience educating residents of the north shore on co-existing with black bears. He recognizes the privilege it is to be sharing the habitat with our wild friends, and advocates for responsible co-existence. 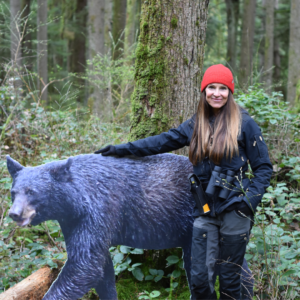 Ellie Lamb is a certified Bear Viewing Guide with over 20 years experience guiding in Bella Coola. Ellie volunteers her time as a director on our board and works with the NSBBS as a consultant on bear behaviour and body language.

Visit our YouTube channel to view The Best Practices for Exploring in Areas Where Bears Live, presented by Ellie.

BOARD OF DIRECTORS (VOLUNTEER)

The Society relies on a small and dedicated team of volunteers. Our volunteers help us to distribute educational material to homes, assist at community events, enter data and hang wildlife signs in the City and District of North Vancouver. We are extremely grateful to the people who share their time to support the coexistence of humans and bears. The demands on our small non-profit are growing each year and we aim to further expand our volunteer team in 2022.

We would like to express our gratitude to Tony and Michelle for sharing their knowledge of bears and ethically taken photographs and videos with the North Shore Black Bear Society. Their images have helped us to increase engagement and awareness and we are endlessly grateful for their support and friendship.

The North Shore Black Bear Network was formed in 1999 after 39 bears were killed, and its goal was to reduce the number of black bears killed on the North Shore. The Network was successful in its efforts to raise awareness of bear attractant management and increase understanding of bear behaviour and was successful in encouraging residents to work to reduce bear deaths.

In 2005, the Network volunteers from the North Shore formed the North Shore Black Bear Society to provide a unified voice for the local volunteers and to allow liability insurance to be purchased for those who are involved in educating and advising residents. The Society’s Board of Directors continues to meet bi-monthly, to provide direction to the Society and its Executive Director